Remembrance ceremony and unveiling of memorial sculpture for deceased children at the Clare County Nursery, Kilrush

The Cathaoirleach of Clare County Council has unveiled a memorial sculpture in honour of the deceased children who died in the Clare County Nursery, at Old Shanakyle Graveyard. 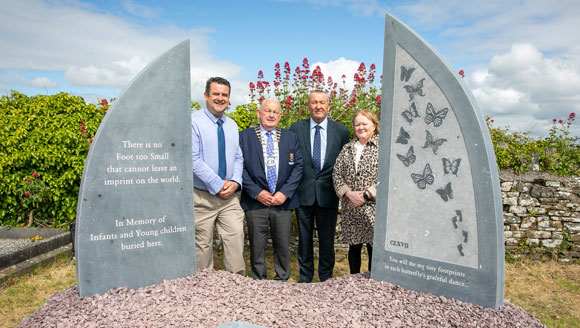 Following a 12-month research and geophysical survey project, the Burial Grounds Unit of Clare County Council has identified a large plot in Old Shanakyle Graveyard, which contains a significant number of children’s burials.

In line with the Government Action Plan for Mother and Baby Homes, Clare County Council commissioned a high-resolution ground penetrating radar survey following lengthy documentary and field research. Following the completion of this survey, it was confirmed that the plot contained burials consistent with the early 20th century burial of infants and children.

A stone sculpture, commemorating the children, was carved by Frank McCormack and the staff at Irish Natural Stone in Tubber. This was unveiled by the Cathaoirleach, Cllr PJ Ryan, at a remembrance ceremony held at the site on Tuesday, 31st May.

Speaking on behalf of the elected members of Clare County Council, Cllr Ryan said: “Every elected member of Clare County Council has requested that the Chief Executive assign the greatest priority to meeting all of the priorities of the Government Action Plan on the Mother and Baby Homes. I am delighted that, today, we have taken another step forward in meeting those obligations.”

Cllr Ryan continued: “The tragedy of the County Nursery is a painful memory to recollect. But it is crucially important that we work to understand the social and administrative context of how tragedies like this happen. We must never forget what happened here in Kilrush and across this island. The injustices faced by women and children, while going through a vulnerable experience, must never happen again.”

The Chief Executive of Clare County Council, Pat Dowling, explained the reasons why he tasked the Burial Grounds Unit staff to undertake this project: “In the highly sensitive elements of memorialisation, restorative recognition, and dignified burial, upon the publication of the Commission Report, I tasked the Burial Grounds Unit of the council to undertake a comprehensive research project to identify and memorialise the infants and young children who died in the County Nursery while in the care of the Clare County Board of Health and Public Assistance. Today is just another step in this council’s effort to accept responsibility for the unconscionable treatment of women and children in this facility, which was managed and funded by Clare County Council.”

At the remembrance ceremony held yesterday, the Chief Executive announced a partnership with the Department of History at the University of Limerick, whereby Clare County Council is funding a PhD Scholarship which will focus on developing greater clarity on the operation of the County Nursery during its 10 years of operation, as well as investigating the treatment of women in other Clare County Board of Health and Public Assistance facilities following the closure of the County Nursery in 1932.

The Chief Executive explained: “I have commissioned a PhD scholarship, in cooperation with our good friends at the Department of History at the University of Limerick, led by Dr David Fleming and his faculty colleagues. A recruitment process for a suitable candidate is currently being finalised and the successful candidate will undertake a comprehensive research thesis which will analyse the administration and treatment of women at the County Nursery, other Clare Board of Health facilities and boarded out children during the 20th century. I have asked our colleague, Dr John Treacy, to assist with this process for the duration of the project, to ensure that all possible help can be given to the successful candidate in their research.”

The event was concluded with a reading from John O’Donohue’s ‘Beannacht’ by Roisin Treacy (aged 10) from Miltown Malbay and a musical reflection on concertina played by Ms Rachel Mahoney from Ennis.

The event was attended by Ms Breda Murphy of the Tuam Mother and Baby Home Alliance who noted after the event that “today was a very special day, honouring and remembering the lost lives of those who were forgotten for decades. I was honoured to attend and witness the outpouring of love and respect for both the mothers and children of the Kilrush Nursery.”