Clare’s Older Volunteer of the Year is named

Shannon volunteer Derek Clune has been named the 2019 winner of the Clare Older People’s Volunteer of the Year Award. 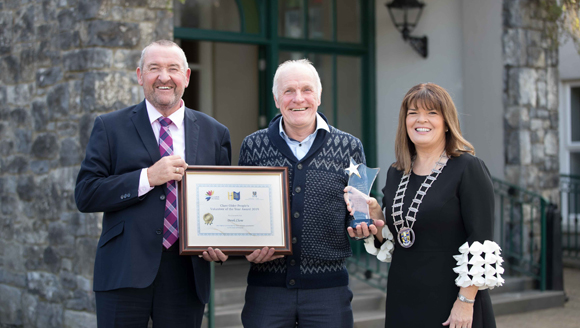 180 people from across Clare gathered on Tuesday, in Hotel Woodstock, for the announcement which also coincides with National Positive Ageing Week.

The function was hosted by the Clare Older People’s Council and supported by Clare County Council.

21 community volunteers from all over Clare were nominated for this year’s award. Pat Dowling, Chief Executive, Clare County Council, presented Derek Clune with an engraved glass trophy as well as a hotel break for two.

Derek’s involvement in the community is threefold in a voluntary capacity as Chairman of Cronan Residents Association, Secretary of Shannon Tidy Towns and Secretary of the Mens Shed. Derek organised Shannon’s participation in the Pride of Place Competition in 2018 when Shannon won first prize in its category. He volunteers with Shannon Musical Society, Wolfe Tones na Sionna, Primary Schools and Shannon Leisure Centre.

Addressing those in attendance, Deputy Mayor of Clare Councillor Clare Colleran Molloy spoke of the importance of voluntary work to local communities and of how such work contributes to the resolution of challenges faced by those communities.

One of the keynote speakers, Mary Cronin, Chair of the National Older People’s Council, spoke about the idea of three rings in a person’s life. The most significant of which was the circle from mid to older life which includes being part of a community and if possible making a contribution to that community. Mary also referred to participation in volunteering as a way of alleviating loneliness and isolation.

The other keynote speaker, Kay Murphy, President of Active Retirement, spoke of the importance of staying active and engaged with voluntary community groups and also on the importance of the interaction between the Older People’s Council and the local authority to influence policy and ensure that the voice of the older person is heard.

Chief Executive of Clare County Council, Pat Dowling, congratulated the winner and all the nominees, who received a framed certificate of recognition for the fact that they had been nominated by their communities. Mr. Dowling also praised the organisers of the event, Clare Older People’s Council and commented on how important the work of the Clare Older People’s Council is to the development of Age Friendly policies and practices within the County itself as the demographic changes and the number of older people increases.