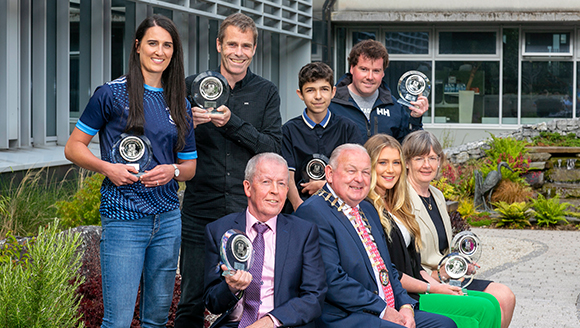 Cllr Ryan hailed the “excellence, bravery and commitment” of the award recipients, who represent a cross-section of the community across Clare.

“I want to take this opportunity to offer my and my Council colleagues’ heartiest congratulations to all of the award recipients,” Cllr Ryan said.

“In varying yet connected ways, all have shown immense commitment, selflessness and dedication by their actions and in their chosen field. I am also delighted to see so many pockets of Clare represented by the award recipients,” he added.

He said that the groups and individuals were an example to everyone in the county.

“What connects everyone who has been nominated for an award is the fact that all have given their time and dedication to making this county a better place. For that they deserve our thanks and respect,” Cllr Ryan concluded.

The seven award recipients are:

In late July 2021, Patrick rescued a seven-year-old Limerick girl from the water at Seafield Pier in Quilty. Patrick, who is a lifeguard and is from Quilty, was walking his dog at the pier when he heard Leah Peters’ mother calling for help. Patrick immediately jumped in and rescued Leah, who had been in the water for some time. Leah’s mother, Julie, described Patrick as “heroic”, while Leah sent him a thank you card with a picture of a superhero.

On August 20, 2021, Róisín achieved the remarkable feat of winning a gold medal at the Ocean Racing European Championships in Normandy, France. Earlier in 2021, Róisín won a silver medal at the Under-23 World Ocean Racing Championship. Róisín is from Clarecastle and works as a biology and chemistry teacher. She has also worked as a lifeguard in Lahinch and previously won European medals in surf lifesaving.

Seán Óg is a leukaemia survivor and is an honorary member of An Garda Síochána. During a very testing time for this county and indeed the entire country, a Covid-19 public information video was posted by Little Blue Heroes. The video featured Seán Óg offering invaluable advice to the public on how best to adhere to Covid-19 public health guidelines. Seán Óg’s message resonated with many thousands of people, as did his bravery when facing his own health battle.

The 12 O’Clock Hills project has evolved and grown very significantly over the last seven years. It has become an integral part of the many outdoor offerings for people in this county, who are seeking a safe and scenic place to walk and explore. It now features picnic tables, a new car park and a fairy trail. The 12 O’Clock Hills committee, led by Patsy Neville, have worked ceaselessly and with great passion in making the amenity what it is today.

Last January, Scariff-Ogonnelloe achieved the remarkable feat of winning a Munster senior camogie title for the second time. They defeated Drom & Inch from Tipperary 1-8 to 1-7 in a thrilling final played in Mallow. Joint captain Mairéad Scanlan scored the winning goal very late in the game. Mairéad was also nominated player-of-the-match, while others to make huge contributions included Aisling Corbett, Alva Rodgers, Abby Walsh and Amy Barrett. The Daly triplets, Rachel, Susan and Lynda, also made a huge contribution to a special day.

The Samaritans will mark 40 years in Clare this year and throughout those four decades their contribution to the county has been seismic. They have provided a listening and non-judgemental ear to many thousands of people who needed somebody to talk to in their hour of need. For this, the Samaritans deserve immense gratitude and respect. Their dedication is a feature of their service, along with their selfless volunteerism.

Ennis and the entire county were delighted to learn in November of last year that the county town had been recognised as Ireland’s Tidiest Town at the SuperValu Tidy Towns Awards 2021. Established 30 years ago, this achievement is testament to the ceaseless work and community orientated dedication of the Ennis Tidy Towns volunteers. Ennis last won this award in 2005, which underlines how difficult it was to be judged first among 847 entrants in 2021.