The development of these new dressing rooms sees the delivery of a longstanding commitment to the town of Ennis from Ennis Town Council/Clare County Council. The completed development comprises a new dressing room building with two dressing rooms with showers, a multi-purpose room, male and female toilets, a universally accessible toilet compliant with ‘Changing Places’ policy and a relocated and upgraded basketball court.

This development is primarily funded by monies ringfenced by Ennis Town Council prior to its abolition and the development is also part funded with a Sports Capital grant from the Department of Tourism, Culture, Arts, Gaeltacht, Sport and Media with the balance of funding from Clare County Council (approved budget of €470,194.44 excluding VAT). 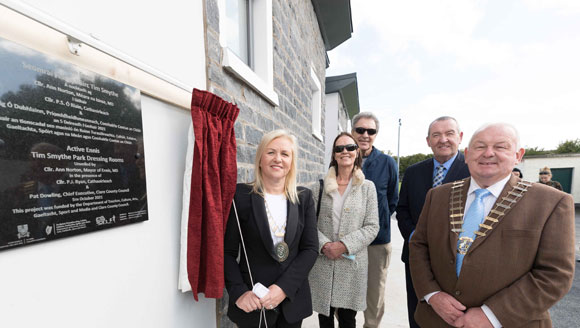 JADA Construction was the appointed contractor who delivered this high-quality finished product.

Booking of these facilities will be through the Active Ennis website (www.activeennis.ie) or by contacting 065-6821604.