An archaeological excavation of a Famine-era house has revealed fragments of a 19th century ankle boot, which provides links to an old folk tradition. The excavation was undertaken as part of the Creative Ireland Programme, a national culture-based programme designed to promote individual, community and national wellbeing. 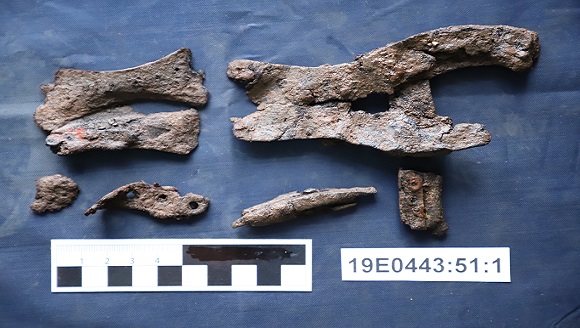 The central vision of Creative Ireland is that every person living in Ireland will have the opportunity to fully realise his or her creative potential. A focus for Clare County Council is Creative Ireland’s Pillar 2, ‘Enabling Creativity in Every Community.’ The Clare vision is “to ensure the people of Clare discover and have access to cultural expression through creative activity”.

The excavation of the Famine-era house site, at Derryboy, near Crusheen, County Clare, took place over three days in October, 2019. Among the finds was an item of footwear, which was found in fragments, located in a deposit that was believed to have derived from the roof and which, following analysis, can be considered a probable example of the practice of concealing shoes, especially children’s shoes, in the fabric of a building.

The fragmentary nature of the remains makes positive identification of a particular shoe or boot style impossible. However, elements of the construction suggest an ankle-high boot of a type that would have been worn in rural areas for outdoor work.

The fragments indicate the boot was very heavily damaged by wear, which resulted in the disintegration of the sole. The estimated length suggests a child’s size 7 half-boot in modern measurement terms. Significantly, the remains are not those of a brogue, which was possibly a more common type of footwear in rural areas in the early 19th century but which was in general decline by mid-century, as mass-produced footwear became available.

The idea that the shoe was deliberately concealed in the roof of the building was first suggested by Josephine Nolan, museum volunteer, in late 2019. Further investigation by archaeologist Graham Hull, of Thames Valley Archaeological Services (TVAS) Ireland, revealed that there are about 2,000 such finds from locations all over the world, and that all previous examples of hidden shoes have come either from Britain or from places colonised by English settlers. This is only the third time a concealed shoe has been found in a house site in Ireland, with the other two occurrences at Augier Street, Dublin, and at a 19th century cottage restoration in Lisacul, County Roscommon.

Elsewhere, shoes, along with other personal objects, have been found concealed in gaps beside or behind chimneys, around windows, under floors and in attics and roof spaces. These objects were deliberately placed in such locations to ward off evil or bring luck to the household. Research has shown that the hidden shoes tend to very worn or damaged, had belonged to a child and were hidden during construction. Worn shoes, especially children’s shoes, were held to have special significance and power to ward off evil and bring good luck.

John Rattigan, Curator of Clare Museum, said: “The museum and Clare County Archives are heading up the excavation project and are utilising our resources to engage with the community for the development of an authentic heritage experience. Archaeologist Graham Hull was engaged to locate and direct the licensed part-excavation of a Famine period house site and a small team of volunteers assisted with the dig. A suitable settlement in terms of archaeological and documentary survival, as well as public accessibility with landowner approval, was identified at Derryboy, near Crusheen. We then selected a small structure within the settlement, presumably a house, for excavation.”

Mr Hull said: “As an archaeologist it is always exciting to find a personal connection to the physical remains of the lives of people associated with the place I am excavating. The child’s shoe that was found in a house at the village of Derryboy and likely abandoned in the Famine is especially poignant. The people from that house most probably hid the shoe for good luck. The awfulness of the Famine makes the temporary privations of the Covid-19 pandemic pale in comparison. I like to think that the shoe did bring some luck and that one of the Australian families who have been in touch with me after reading about our excavation in Derryboy may be descended from that child.”

Reports and videos from the excavation can be accessed via the Clare Museum website: http://www.clarelibrary.ie/eolas/claremuseum/education/museum_and_creative_ireland.htm

Fragments of a 19th century ankle boot found at a Famine-era house, at Derryboy, near Crusheen, County Clare. The excavation of the site took place over three days in October, 2019.