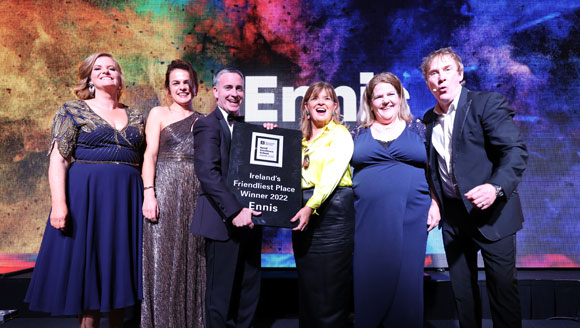 Ennis retail stores made a huge impression on the mystery shoppers in July of this year to secure the town a shortlisting for this award, along with Ashbourne and Moynalty in County Meath, Monaghan Town and Carrick-on-Shannon in County Leitrim. This was followed by a public vote which took place in October.

Following the announcement, Mayor of Ennis Municipal District, Cllr Clare Colleran Molloy, said: “This recognition is testament to all those retailers in the town who are committed to making Ennis a great place to visit and shop. I would also like to take the opportunity to thank everyone who took the time to vote for Ennis.”

Carmel Kirby, Director of Service with Clare County Council, added: “This win is an acknowledgement of the strong collaborative work by the retail and community sector and other stakeholders in Ennis, to provide a unique town centre experience.”