A 1947 Dodge car once owned by Eamon de Valera has been moved from its display building in Harmony Row to a new home in the newly refurbished exhibition area at Clare Museum. 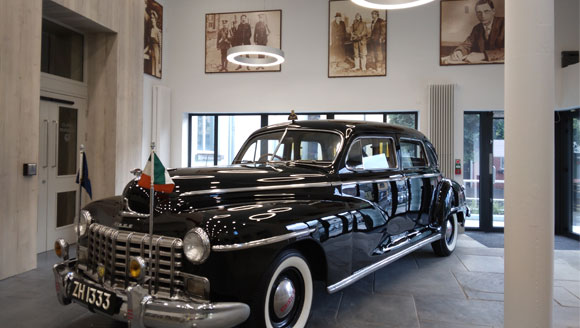 The car, which was used by Eamon de Valera during his years as President of Ireland, was often to be seen on the roads of Clare in the 1960s and is fondly remembered by the Clare public. It was manufactured in Detroit, Michigan, US, in 1947 and was originally the property of President Sean T O’Kelly. Although de Valera continued to use a Rolls Royce for State occasions while President of Ireland, he purchased the Dodge from Sean T O’Kelly, the outgoing President, and had it resprayed from its original maroon to black for his personal use in the late 1950s.

The black Dodge would go on to be a familiar sight in Clare. Many older Clare people associate the vehicle with the annual Clare Agricultural Show during the 1960s, when President de Valera would attend to present prizes. But it was also a familiar sight in north Clare as President de Valera would often visit his old friend and former TD and Senator, Peter O’Loghlen in Ballyvaughan, where the arrival of the car always caused a stir.

Eamon de Valera’s connection to Clare dates back to the epic East Clare by-election of 1917, and he continued to represent the county as TD for the next half century. Because of this intimate connection, the car was donated to Clare County Council by his daughter Maureen in 1988. In 1992 it was placed on display in a purpose-built building behind the Local Studies Centre in Ennis constructed by M. Fitzgibbon Builders. In the same year, Sean Rutherford of Clare County Council drove the car to Bunratty to mark the opening of the Bunratty bypass, while Sean and John Murphy drove the car in the St Patrick’s Day Parade in Ennis for a number of years.

Cllr Tony O’Brien, Cathaoirleach of Clare County Council, said: “I am delighted that Eamon de Valera’s 1947 Dodge car has found a new home in the surroundings of the refurbished Clare Museum. The car has a long history in County Clare. Without doubt, this iconic vehicle is another attraction to the museum and to the town of Ennis.”

Works in preparing the new space in the museum building were undertaken in the summer of 2021 and, in an unusual turn of events, the re-development of the space was managed by Michael Fitzgibbon, the son of Martin Fitzgibbon, the contractors on the original building for the car. The reconfiguration of the tourist office, together with new windows, allow the car to be viewed from outside the building.

On the day of its transfer to Clare Museum, the vehicle was driven from its original place of display to the museum building by Cllr PJ Ryan from Cratloe, who has taken a personal interest in the car over many years. Having driven the car on the day, Cllr Ryan spoke of his involvement with the car, saying: “I have had particular involvement with this car since I was involved in its restoration in 2010/2011, sourcing original parts in the United States and driving it at a number of historic events, and getting it running smoothly again this time to bring it to Clare Museum.” Previous bodywork was carried out by David Browne of John Browne’s Autobody Shop in Cratloe some years ago and it is wonderful that it is now safeguarded for the future and is still mechanically sound. An official launch of the car is planned for later in the year.

Admission to Clare Museum is free.