Clare County Council has been presented with a piece of marble screen by the People’s Government of Yunnan Province, the local authority’s twinning partner in China. 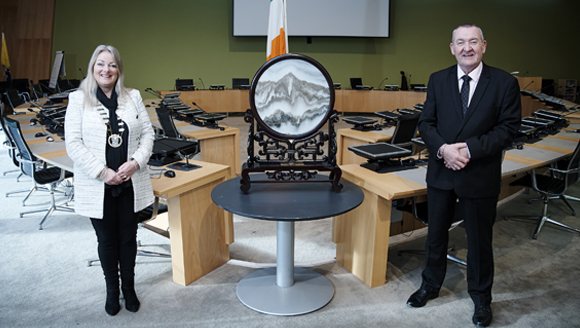 The presentation follows the fifth anniversary of the establishment of the partnership between Yunnan Province and County Clare.

The depiction on the marble screen, which was made in Yunnan, evokes the spectacular karst landscape in the region.

Like the Burren and Cliffs of Moher Geopark, Shilin (Stone Forest) Geopark in Yunnan is renowned for its karst landscape and it is also a UNESCO recognised Geopark.

Whereas the Burren landscape features examples of horizontal limestone pavement, the karst landscape in Yunnan Province is vertical, with tall, pillar-like limestone, and is at a high altitude.

A number of exchange visits between the two twinning partners have taken place since Local Government and Government officials from County Clare and the Chinese Province of Yunnan signed an agreement in May 2015 aimed at developing closer ties between the regions.

Clare County Council is interested in further expanding this partnership to strengthen tourism from China to Clare and to explore opportunities for exports of produce from Clare to China.

The partnership provides Clare businesses with a gateway to learn about the Chinese market and explore potential new market opportunities. A number of local food producers export to this market and, while Covid-19 has restricted opportunities in the short term, China offers significant potential, particularly for food-related businesses and service providers. On a previous exchange in 2016, food producers from Clare visited Yunnan Province with the then Mayor of Clare, where they attended a food produce exhibition.

The Tourism Department of Clare County Council, in line with objectives in the recently published County Clare Tourism Strategy 2030, is working towards positioning Clare to be recognised internationally for its commitment to responsible tourism and sustainability, and is also exploring ways to promote Clare as a destination to future growth markets, including Asia and China.

The marble screen presented to the Council will be placed on permanent display in Áras Contae an Chláir in Ennis.

The Tourism Department with responsibility for twinning in Clare County Council is arranging to reciprocate this gesture and will forward a gift to the People’s Government of Yunnan Province of a painting of the Burren. Local artist, Manus Walsh, has painted a piece depicting the unique landscape of the Burren. The Burren’s constantly changing light and shade with its terraced hills, sloping down to the Atlantic Ocean and its ancient prehistoric monuments, is the inspiration for his work.

Pat Dowling, Chief Executive, Clare County Council, said: “The agreement between Clare County Council and the Yunnan provincial government forms the basis for ways to expand and deepen friendly exchange and cooperation in various fields between County Clare and Yunnan Province. Cultural, diplomatic and economic relations between our two countries have grown and strengthened significantly over the years. We look forward to continuing to build on our strong relationship with Yunnan Province.”

Leonard Cleary, Director of Rural Development, Clare County Council, said: “County Clare and Yunnan Province have recognised common links, such as the karst geology in the Burren and Cliffs of Moher and Shilin UNESCO Global Geoparks. Both areas are renowned internationally in the fields of geoscience and tourism. Our aim is to continue to explore and develop closer industrial, tourism, farming, educational and cultural ties between our two regions.”

The Mayor of Clare, Cllr Mary Howard, and Pat Dowling, Chief Executive, Clare County Council, are pictured at Áras Contae an Chláir in Ennis with a piece of marble screen presented to Clare County Council by the People’s Government of Yunnan Province, the local authority’s twinning partner in China.