At the October meeting of Clare County Council, the Cathaoirleach Cllr PJ Ryan stated his disappointment that the remainder of the Limerick Northern Distributor Road (LNDR) has not been included in the programme in the National Development Plan 2021-2030 (NDP) by the Government, but added that he believes the road will be completed in due course. 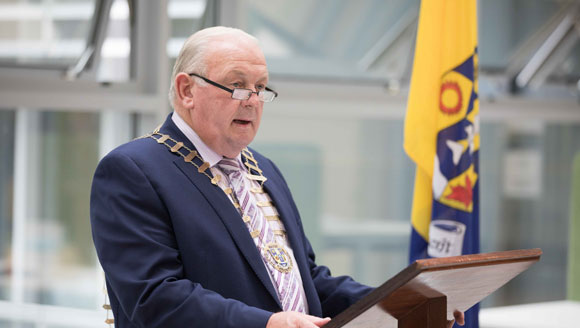 The LNDR is not included on the list, even though the first phase of the project (Coonagh to Knockalisheen) is already under construction.

Cllr Ryan said: “I am disappointed that the remainder of the LNDR, a vital infrastructure project for this county, is not included in the programme in the NDP. However, I do not believe that its omission is a show-stopper for what we in Clare want to achieve for this part of our county.”

Cllr Ryan welcomed that commitments were repeated to the Killaloe Bypass and Bridge Crossing, a non-national roads project as well as a commitment to much-needed investment in general road maintenance.

Cllr Ryan continued: “Also, while not specifically listed in the NDP, the plan commits to upgrading existing national road networks and enhanced regional accessibility which should include the N19 Shannon Access Road. The plan also addresses towns and villages that are experiencing major congestion and, again, while not specifically listed, I am hopeful that the Ennistymon Inner Relief Road (Blake’s Corner) will continue to be funded as well as the N85 improvements at Kilnamona.

“The NDP commits to the Flood Risk Management Plans carried out under the Catchment Flood Risk Assessment and Management (CFRAM) Programme, which should see the flood relief schemes at Shannon, Kilkee, Springfield, Bunratty and Kilrush being delivered over the lifetime of the plan. The Limerick City and Environs Flood Relief Scheme is specifically listed which will provide flood protection to Westbury, Shannon Banks and the Clare Campus of the University of Limerick. The NDP also commits to continued funding for minor flood schemes.”

Cllr Ryan noted that the NDP is committed to Active Travel and Greenway projects, many of which are progressing across County Clare currently and, while not specifically listed in the NDP, he said he is hopeful the West Clare Railway Greenway and other Active Travel projects will be delivered under this plan.

Concluding, Cllr Ryan said: “While the lack of specific mention of the LNDR in the NDP is a disappointment, phase 1 of the road is already under construction and I believe that the rest of this important road, which will support the University of Limerick (UL)/South Clare Strategic Development Zone, will happen in due course.”