In recognition of the benefit that arts and creativity can bring in assisting individuals and communities in this challenging time, Clare Arts Office created the Cúram awards, an initiative as part of Clare County Council’s ‘Keep Well’ campaign. 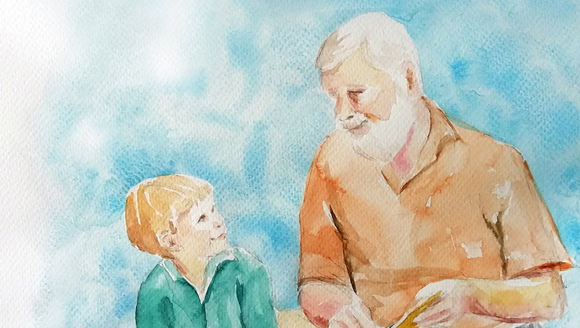 There was a very strong reaction to this call and some wonderful proposals were received. Awards have been made to poet Grace Wells, traditional singer Rachel Uí Fhaoláin, theatre practitioner Jenny Bassett, and artists Tim Humphries, Róisín Kelly and Ana Colomer.

Ana’s project, A Book of Hope, is the first project to start. Ana is inviting older writers to submit a short story, letter or poem, written to a child in their life, for her new project. It could be written to a grandchild, a nephew or niece, a friend’s child, or even to themselves when they were little. It could be factual or fictional, but she is asking them to write about life as they knew it when they were children, and mention things such as toys, games and food that are not common any more. As it will be a book for children, submissions should be written in a child-friendly tone.

A panel will select some of the pieces of writing which will then be compiled into A Book of Hope, which Ana will edit and illustrate. Clare County Library has kindly agreed to display all the submissions received.

Ana hopes that the project will benefit two different groups: the older group of writers and the younger group of readers. As a lot of older people are cocooning, they have often been unable to interact with the children in their lives, which has led to feelings of anxiety and loneliness. Ana hopes that they will enjoy writing to these children and that it will help to restore the connection between them. It may even encourage them to continue writing.

For the young readers, the book could be really special, a treasure to keep and cherish. Children may have been feeling confused and sad and have really missed spending time with older members of their family. Ana hopes that they may be inspired to find out more about their family history, such as what songs their elders sang, what games they played, where they lived, and what they wore. Perhaps they will choose to write back, which might lead to another book!

Ana hopes that A Book of Hope will be a tool to connect two generations that have been separated by the incredibly challenging circumstances that we are all experiencing. She welcomes submissions, by February 10th, 2021, which can be emailed to her at artwithana@gmail.com

A Book of Hope is supported by Clare Arts Office through its Cúram initiative as part of Clare County Council’s Keep Well campaign.

A Book of Hope by Ana Colomer is the first project to start under the Cúram initiative, supported by Clare Arts Office as part of Clare County Council’s Keep Well campaign. Image: Ana Colomer.