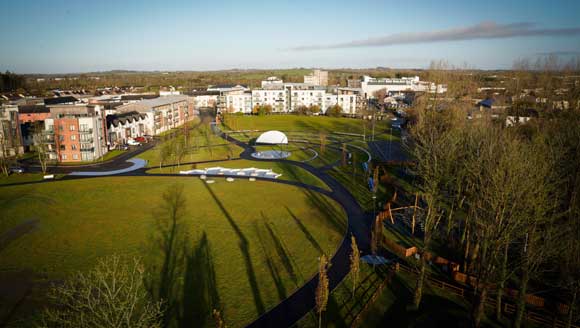 Clare County Council was allocated €455,000 in EU funding from the Southern Regional Assembly's Operational Programme 2014-2020 in early 2016 to support sustainable urban development in the Limerick-Shannon Gateway. Clare County Council will fund the balance of the overall cost of the project. The sanctioning authority for the Shannon Town Park project is the ERDF Auditing & Certifying Authority within the Department of Public Expenditure & Reform.

The €910,000 project will see the enhancement and incorporation of the existing town park woodland and the adjacent Rineanna Park into a flagship Town Park for the people of Shannon.

Input was sought from members of the public and stakeholder groups interested in the proposed Shannon Town Park project during a 5-week period of public consultation in late 2016.

The Local Authority engaged with various stakeholders, including schools, residents, locals and visitors to the Shannon area. A questionnaire was made available in the Shannon Municipal District Office, Shannon Library and at Shannon Leisure Centre, and ideas and comments could be submitted up to 2 December 2016.

Design consultant (Nicholas de Jong Associates) gave a briefing to the Shannon Municipal District members on 10 January 2017 on the status of the project following the first phase of public consultation in November/December 2016 and in advance of a second phase public consultation on the proposed design of the Shannon Town Park.

Clare County Council hosted an informal information session in Shannon on 12 January 2017 to present the latest design proposals for the new Shannon Town Park. The informal information session was to provide a further opportunity for people living and working in Shannon town and surrounding areas to comment on the emerging design proposals which were informed by the first phase of consultation through responses to questionnaires and feedback from public consultation undertaken in late 2016.

Representatives from Clare County Council, Design Consultants (Nicholas de Jong Associates), Ecologist (Dr. Janice Fuller) and Arboriculturalist (Michael Garry, Arbor-Care) were present at the public consultation to respond to questions and to listen to opinions and comments in relation to the project.

The statutory Part VIII application was lodged with Clare County Council on 10 February 2017 for a new Shannon Town Park which consisted of:

For the redevelopment of Shannon Town Park along with Rineanna Park to deliver a new flagship Shannon Town Park. The proposed works include the creation of a natural water feature, adventure play area and a bandstand/performance area, along with the formal laying of footpaths, cycle track, lighting and the creation of formal and informal seating areas. The development will also include works to the two no. junctions on Bóthar Linne along the southern perimeter of the site, and the creation of a pedestrian crossing on same.

On 10 April 2017 the Part VIII application for the "Proposed Redevelopment of Shannon Town Park along with Rineanna Park to deliver a new Flagship Shannon Town Park"  was agreed and  granted by Members of Clare County Council.

In April 2017 a briefing was given to Shannon Municipal District members by Design Consultant Nicholas de Jong Associates on project progress. The Design Team also met with the Steering Group to review the Planning conditions and Pre-Tender documents.  From May to October 2017, the Design Team developed the detailed design of the Shannon Town Park project for the works contract tender stage.

The tendering process progressed during the period November 2017-April 2018, however due to difficulties experienced by the preferred tender entering administration and therefore not being able to fulfil the project and due to the requirement to comply with EU procurement law and rules and the terms of the ERDF funding, the tender for the New Shannon Town Park works contract was republished on e-Tenders in June 2018 with a closing date of 27th August 2018. Following a review of tenders received by the Design Team the successful tender, M. Fitzgibbon Contractors Ltd., were awarded the contract. 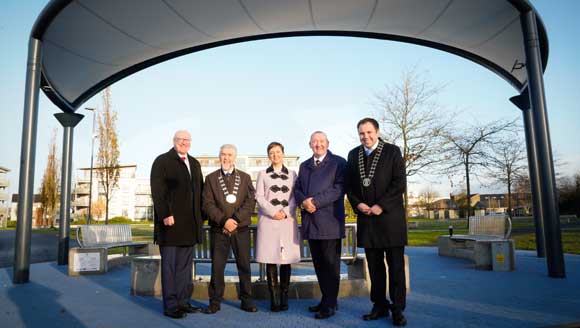 The main aim of the park is to contribute to the recreational amenities of Shannon Town and the revitalisation, regeneration and improvement of the urban environment in the designated urban centre of Shannon as part of an integrated urban design strategy. The new Town Park design has been informed by an extensive public consultation process undertaken by Clare County Council. It provides an enormously valuable outdoor recreation amenity for the entire Shannon and South Clare community and will be a major component of the award winning Shannon Town Green Infrastructure Plan 2013, creating linkages with other key amenity areas including the Shannon Estuary Embankments cycle and footpath and the Shannon Wetlands Restoration Project.

The new Shannon Town Park caters for all sectors of the community and includes formal footpaths and cycle track, an adventure play area, a cycle pump track (the first to be built in the region), formal and informal seating areas, picnic areas, lighting and signage, the creation of a natural water feature and new native woodland planting, and all ancillary works and services. The new Shannon Town Park includes a distinctive bandstand providing a central focal point and an attractive outdoor venue for festivals and performances by local and visiting artists and musicians, which can be viewed from the informal semi-circular seating areas. A new Toucan pedestrian/cycle provides safe crossing on Bóthar Linne from schools and other public amenities in the area.

A fully-lit central spine path meanders through the park, linking the Leisure Centre and St. Patrick's School to the town centre, and with a new Toucan pedestrian/cycle crossing providing increased safety at the entry from Bóthar Linne. From a permeability and public safety viewpoint there are a series of other access points into the park and walkways connecting the main activities, and enhancing the connectivity between recreational areas, schools, residential areas and the town centre amenities.

The park is located within mature existing woodland and its design enhances the natural setting by retaining existing trees whilst creating additional features such as areas of wildflower meadow, the creation of a semi-natural pond feature with aquatic planting, 30 semi-mature trees, around 1,700 young trees and 250 metres of hedgerow, enhancing both the amenity and bio-diversity of the area.

Clare County Council is affiliated to Leave No Trace Ireland which is an outdoor ethics educational programme designed to encourage people to make better decisions when using the outdoors. Shannon Town Park users are encouraged to respect this amenity and minimise impact on the environment by taking litter home, keeping dogs under control and generally being considerate of other park users.