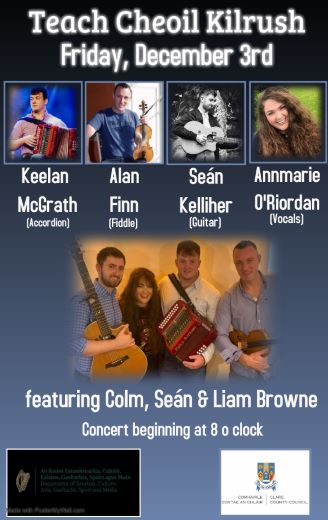 Alan Finn, group leader, is from Buttevant and plays Accordion and fiddle. Alan has won All Ireland titles with the Awbeg and Shandrum Ceili Bands, and has coached groups and bands to All Ireland success.

Annmarie O’Riordan, from Millstreet, participated in various competitions and recorded her first song at Age 12. She recorded her first album “Harmony handed down” in 2003. Alan, Keelan and Annmarie will be accompanied by guitarist Sean Kelliher.

Kindly supported by the Clare Arts Office and The Department of Tourism, Culture, Arts, Gaeltacht Sports and Media. #LocalLive