Clare County Council has revealed details of a significant upgrade of the public realm in Ennistymon being undertaken as part of a capital project investment in the town. 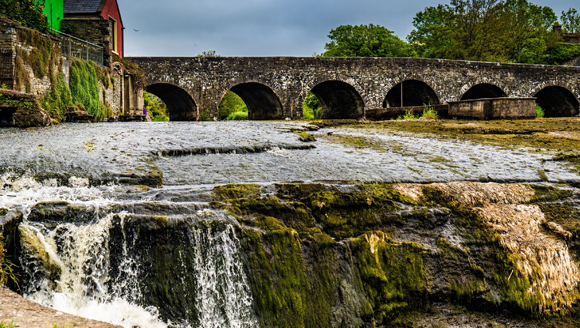 The provision of natural limestone and granite paving, a new pedestrian crossing, street furniture, improved signage, and the replacement of existing timber and steel electricity and public lighting poles with new decorative lighting are among the features of the project, which aims to increase visitor dwell time in Ennistymon and further enhance the overall appearance of the town.

€500,000 has been allocated towards the project by Fáilte Ireland under the Destination Towns Programme, with the local authority providing an additional 25% match funding.

Phase 1 of the project, which commenced in late March, has been progressing well, according to the local authority. The current phase of the works involves the laying of underground ducts to divert the ESB Network supply underground after which all overhead cables from the bottom of Church Hill to Parliament Street and the Square will be removed and replaced with decorative street lighting.

The local authority says numerous historical issues have been encountered in the course of the works, including poorly laid sewers, water mains, ESB cables, telecommunication cables and storm water culverts, which has been described as typical of a job of this nature in an old town centre with a congested underground network.

Clare County Council says the works have progressed to the Square area and will shortly advance up the river side of Main Street to complete the loop at the Archway between Byrne’s and the Cheese Press, during August. Archaeological monitoring of the works is continuing as works progress.

Following the completion of phase 1 of the project, works will begin on the laying of natural blue limestone kerbing and silver granite pavement. It is proposed to start directly across from the Archway, at the Faust Gallery, and continue down to Parliament Street, the Square Area and back along the river side of Main Street. A new pedestrian crossing will also be installed next to the Archway.

Street furniture (benches, planters, trees) will then be installed at suitable locations within the town, which will enhance the overall visual attractiveness of the town. New and improved signage will also be erected throughout Ennistymon as part of the project’s goal of developing the town’s untapped potential from being a transit zone, that people pass through, to a destination where visitors want to stay longer and experience the local culture and attractions.

Public consultation is also due to take place in relation to the installation of a public artwork, as part of the project, and it is hoped to progress this in tandem with the ongoing works which are due for completion by the end of 2021.