In response to the increase of complaints relating to fouling in public places a countywide enforcement campaign will take place where problem areas in relation to dog fouling will be targeted by Clare County Councils Waste Enforcement Unit. The public are advised that Environmental Enforcement Officers will be on the ground and will be asking people to demonstrate how they clean up after their dog. 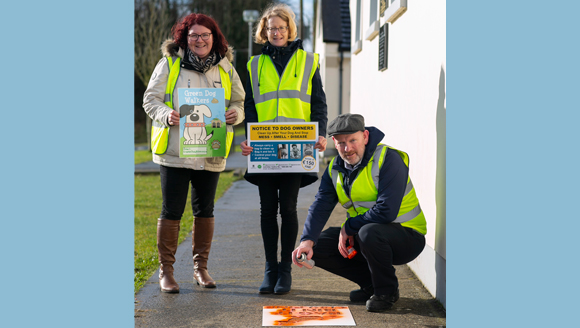 Maria Carey, Executive Engineer with Clare County Councils Waste Enforcement Team outlined "There will be an increased on the ground presence by our Enforcement Officers in locations where dog fouling is known to be a problem. Members of the public will be able to identify these targeted locations by a footpath sign advising dog owners to clean up after their dog". Enforcement Officers have been talking to Dog Owners in Ennis (Lee’s Road and Tim Smythe Park), in Scarriff, Crusheen, Feakle, Shannon, Sixmilebridge and Lahinch to promote the message of responsible dog ownership.

Dog poop is not only an unpleasant sight and smell, but it is unhygienic and can spread disease. It has been estimated that a single gram of dog waste can contain 23 million faecal coliform bacteria, which are known to cause cramps, diarrhoea, intestinal illness, and serious kidney disorders in humans. It can also contain nasty bacteria such as E coli and parasites like roundworm, the larvae of which can cause loss of vision.

Under the Litter Pollution Acts 1997-2003, dog-owners are required to clean up after their animals is it fouls in a public place such as public roads, footpaths, parks and beaches. Failure to do so can result in an on-the-spot fine of €150.

Karen Foley, Environmental Awareness Officer, Clare County Council, acknowledges "The majority of people walking their dog in public spaces are good about picking up after their dog but there is a small number that remain not to do so. We would like to remind people that responsible dog owners control their dog at all times, always clean up after their dog, dispose of dog poop bags in the nearest litter bin. Where there is no bin they bring their dog waste home for disposal into their general waste bin. In addition, responsible dog owners,never dispose of dog poop bags, including compostable/biodegradable bags, in hedges, fields, forested areas as well as beaches."

Many communities are participating in Clare County Councils Green Dog Walker (GDW) campaign. Clare County Councils Greener Clare programme will continue to support communities in rolling out this initiative in their own locality. The GDW initiative encourages dog owners to clean up after their animals and is a non-confrontational, friendly way to change dog owner behaviour in relation to dog litter. People can pledge to be a Green Dog Walker and receive a free pack. A Green Dog Walker pack contains a complimentary GDW high-vis vest, poop scoop bags and an information leaflet.