‘1919: The War of Independence’ is the theme of Clare County Library’s ‘Decade of Centenaries History Week’ taking place from 14th September to 20th September. 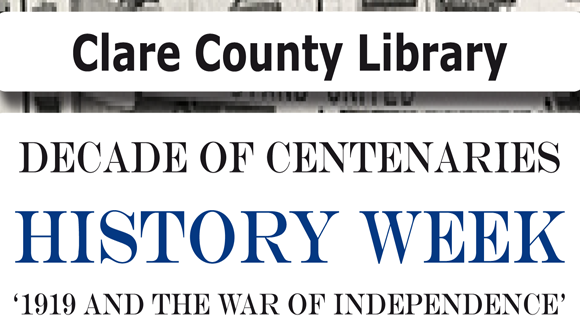 The week starts with a History Ireland Hedge School with historians Tomás Mac Con Mara, Pádraig Óg Ó Ruairc, Cécile Gordon and Eve Morrison and chaired by History Ireland editor Tommy Graham.  They will discuss ‘The War of Independence in Clare: reassessing David Fitzpatrick’s Politics and Irish Life 1913-1921: provincial experience of war and revolution.’  This work was a ground-breaking local study of Clare which became a template for other local studies of the War of Independence.  This will be held in the Temple Gate Hotel at 2.00pm on Saturday, 14 September.  The event is free but capacity will be limited.

Carnation Theatre will present two performances of ‘Greyhound on Train’.  This War of Independence performance tells the stories of four women during the struggle to achieve Irish independence - Elizabeth Bloxham, teacher, pamphleteer, rabble rouser, radicaliser, Peg Flanagan – waitress, gun runner, spy and witness to Bloody Sunday, Josephine Stallard – doctor, dispatcher, whirlwind romancer and Bridget Fitzpatrick – a central figure in the ambushes at Knocklong and Soloheadbeg.  Interspersed with songs of the period, this is an enjoyable historical account.  The shows will be held on Tuesday 17 September in DeValera Library at 1.00pm and Shannon Library at 6.00pm.

Mike Hanrahan will perform his show Clare: Songs of Independence: The Beginning.  This enjoyable performance is based on the events and stories behind Clare’s songs of the period.  Three shows will take place during History Week – on Thursday 19 September in DeValera Library, Ennis at 1.15pm and Scariff Library at 6pm and on Friday, 20 September in Kilrush Library at 1.15pm.

Shannon Library will host an exhibition on ‘The Limerick Soviet’ from Friday 13 September until Friday 4 October.

Children are also catered for during History Week.  Brian Gallagher, author of historical children’s fiction, will give presentations on his most recent works Pawns and Spies.  Brian will talk to primary school children in the library branches in Ennistymon, Miltown Malbay, Shannon and DeValera Library in Ennis on Thursday 19 and Friday 20 September.

Further information from www.clarelibrary.ie, your local library or 065 6899082.